Share
This page is a translated version of the page Nicotine / THR - Change the Conversation and the translation is 100% complete.
Other languages: 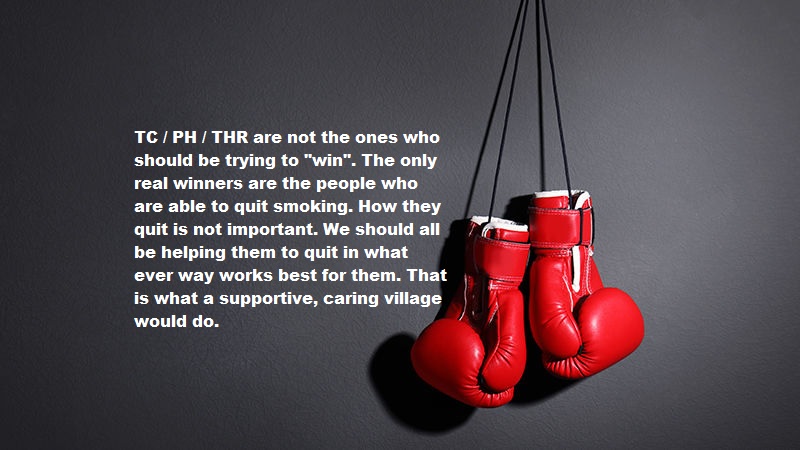 The war to end smoking has turned into the war on nicotine.

The focus has been lost, and who the "winners" and "losers" will be has changed. It is now Tobacco Control (TC) and Public Health (PH) vs. Tobacco Harm Reduction (THR). Caught in the middle are consumers who smoke, consumers who used to smoke, and industry stakeholders. AS TC/PH fights THR with both sides trying to "win" against the other, the world has forgotten the real "winners" and "losers". People who succeed at quitting smoking are the only real winners in this battle. People who die from smoking are the only losers in this fight. This is what we should be concerned about - people who smoke. It is time to #ChangeTheConversation. For TC/PH and THR to sit down and talk real solutions. Work on ways to limit initiation of smoking (and all age restricted products) while keeping Safer Nicotine (THR) products on the market for adults who smoke.

We need to listen to the people and orgs below, who have put out the call to Change The Conversation.

2020, Aug 10 - Polarization Within the Field of Tobacco and Nicotine Science and its Potential Impact on Trainees

2020, Apr 23 - Tobacco harm reduction: Past history, current controversies and a proposed approach for the future

2018 Caught in the middle: early career researchers, public health and the emotional production of research

2021, Mar 4 - Cliff Douglas Manifesto: It is Time to Act with Integrity and End the Internecine Warfare Over E-Cigarettes

2015 - A Proposed Collaboration Against Big Tobacco: Common Ground Between the Vaping and Public Health Community in the United States

2018: Joe Gitchell How to feel AND think about nicotine and those who use it

2021: Finding ‘common ground’ on shifting sands: observations on the conflicts over product regulation

"By demonising a company that is doing exactly as the Editors demand, we might never know exactly how much of an opportunity a tobacco harm-reduction strategy will bring to public health. The only losers if this happens will be the men and women who continue to smoke."

The Science of Disputes and Negotiations

Minors, Moral Psychology, and the Harm Reduction Debate: The Case of Tobacco and Nicotine

Is Nicotine All Bad?

Evidence, alarm, and the debate over e-cigarettes

The Problem With Certainty

Framing and scientific uncertainty in nicotine vaping product regulation: An examination of competing narratives among health and medical organisations in the UK, Australia and New Zealand

Re-thinking nicotine and its effects

The challenge for policy makers and regulators is to imagine how policy levers, regulations, and other tobacco control activities can be used in tandem to optimize population health: Preventing youth initiation and escalation, while helping 40 million smokers move to less harmful products and making it easier for them to quit and stay quit.

2014 Memo to public health grandees: vaping, vapers and you

Retrieved from "https://safernicotine.wiki/mediawiki/index.php?title=Nicotine_/_THR_-_Change_the_Conversation/en&oldid=11312"
Categories:
Cookies help us deliver our services. By using our services, you agree to our use of cookies.