Fires and explosions are extremely rare

Figures from the London Fire Brigade show that smokers are 266 times more likely to have a fire than those who vape.

Smoking: Number one cause of fatal fires

In London, smoking is the number one cause of fatal fires and one of the top three causes of all accidental fires in the home. There are around four smoking related fires a day, with three people being injured each week. On average at least one person every month dies in a smoking related fire.

The Brigade’s figures show that in London since 2014:

Such is the concern about smoking related fires that fire chiefs are now urging smokers to take up vaping to reduce the risk. The Brigade’s warning comes during Stoptober, a Public Health England campaign which encourages people to stop smoking for 28 days in a bid to quit for good.

“Our message is simple: quit smoking or risk dying in a fire. Firstly, we would urge you to stop smoking completely but fully appreciate that this is your decision. If you still need that nicotine fix, vaping is a much safer alternative. Hundreds of people are injured in smoking related fires each year but we’ve not had any reports of injuries or deaths caused by e-cigarettes.

“Vaping isn’t completely risk-free from either a fire or health perspective and we would urge you to always use the correct charger, ensure your batteries are not damaged and not to charge e-cigarettes over night or when you’re out of the house.

“With smoking, one of the biggest mistakes people make is falling asleep with lit cigarettes, or they fail to dispose of cigarettes or matches properly, which can smoulder and cause fires.” 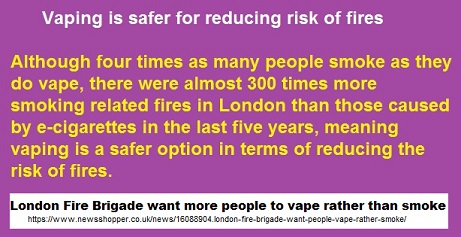 Retrieved from "https://safernicotine.wiki/mediawiki/index.php?title=What_about_fires_and_explosions%3F&oldid=5094"
Cookies help us deliver our services. By using our services, you agree to our use of cookies.