Chapman was born in Bowral, New South Wales to Margaret and Alec Chapman who had emigrated from England in 1948. He is an Emeritus Professor in Public Health at the University of Sydney.[1] In his PhD in social medicine he examined the semiotics of cigarette advertising.[2] He has authored 21 books and major reports, 340 papers and editorials, and 194 letters and commentaries in peer reviewed journals.

Chapman is a regular writer on public health matters in leading Australian newspapers and blogs, having written some 407 opinion page and journalistic articles since 1981.[3] His main research interests are in tobacco control, media discourses on health and illness, and risk communication. He taught annual courses in Public Health Advocacy and Tobacco Control in the University of Sydney's MPH program. He wrote a regular column, Smoke Signals, on public health matters for The Conversation from January 2015-August 2017 which by December 2019 had been read 3.338 million times. He blogs at simonchapman6.com

In 1997 Chapman won the World Health Organization's World No Tobacco Day Medal; in 1999, the National Heart Foundation of Australia's gold medal; in 2006 the Thoracic Society of Australia & New Zealand President's Award.[4] In 2003 he was voted by his international peers to be awarded the American Cancer Society's Luther L. Terry Award for outstanding individual leadership in tobacco control.[5] In 2005, his research on the tobacco industry was selected by the National Health and Medical Research Council as being one of its "top 10" projects. He was foundational deputy editor of the British Medical Journal's specialist journal, Tobacco Control, and its editor from 1999 to 2008. He was Tobacco Control's commissioning editor for Low and Middle Income Countries from 2008–2010 and is now editor emeritus.

Chapman studied health complaints regarding wind farms in Australia in 2012 and concluded the complaints were likely to be the result of nocebo effects.[6][7]

In 2008 he was awarded the $50,000 NSW Premier's award for Cancer Researcher of the Year, voted to become a Fellow of the Academy of Social Sciences in Australia, won the Public Health Association of Australia's Sidney Sax medal,[8] and was included in the wikipedia:Sydney Morning Herald's Sydney Magazine list of 100 of Sydney's most influential people. He appeared in that magazine's list again in 2012. In 2013 he was given a Distinguished Professorial Award by the faculty of Medicine at the University of Sydney and made an Honorary Fellow of the Faculty of Public Health of the Royal College of Physicians (UK).

Simon Chapman is a life member of the Australian Consumers' Association and was its chairman 1999–2002. He served on the board of The Cancer Council New South Wales for nine years until 2006. He was a key member of the Coalition for Gun Control which won the 1996 Australian Human Rights and Equal Opportunity Commission's Community Human Rights award for its advocacy for gun law reform after the Port Arthur massacre in 1996. The Australian Skeptics Inc conferred on him the award of Australian Skeptic of the Year in 2013.[9]

In November 2019, he directed the inaugural St. Anmoré (Stanmore) Festival of Music to honour the late conductor and musical educator Richard Gill AO

He retired in January 2016 and was awarded Emeritus Professor status by the University of Sydney commencing 2016.[15]

In December 2017, Public Health England accused him of presenting factual errors during a Federal Government Enquiry[16] His full reply to these claims was published in Hansard (submission 313.1[17] 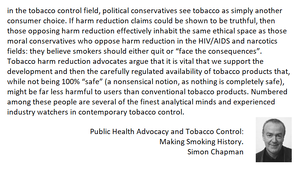 He seems to support Harm Reduction, except that he doesn’t support any of the safer products that have come to market?

Simon Chapman has had a long career in Tobacco Control, and has extensively published academic articles, been an editor of BMj tobacco control and has been used in a consultation role for WHO see wiki Simon Chapman (academic)

One particular reason for his inclusion in this Safer Nicotine Wiki is his position regarding Smoking Cessation, dismissing the merits of safer nicotine products in his blog entries and frequently entering into hostile angry exchanges with peers and members of the Public alike usually by the twitter medium.

One particular sad incident involved Lorien Jollye who had the temerity to write into the Lancet pointing out factual errors in a Simon Chapman entry ,this resulted in a 4 person broadside from Chapman,McKee,Glantz and Daube see Voices From The Street.and A Lesson In Manners. this unbecoming behaviour also covered here by Clive Bates The Worst Letter of 2014 - a review and a general comment to Public Health professionals Memo to public health grandees: vaping, vapers and you

Retrieved from "https://safernicotine.wiki/mediawiki/index.php?title=Simon_Chapman&oldid=26536"
Categories:
Cookies help us deliver our services. By using our services, you agree to our use of cookies.