'Easyway' has just announced a partnership with WHO:- Allen Carr's Easyway Partners With the World Health Organisation for a Global Year-long Campaign to Support More Than 100 Million People as They 'Commit to Quit' Smoking Press release

It should be noted that an RCT exists [ https://journals.sagepub.com/doi/full/10.1177/014556131709600701 Prospective, Randomized, Controlled Trial Using Best-Selling Smoking-Cessation Book] that did not find that 'Easyway' was particularly, if at all effective

A RCT exists that is altogether more positive though it should be noted the study was funded by ACE (Allen Cars Easyway) as is mentioned here https://www.eurekalert.org/pub_releases/2020-01/sfts-nss011620.php, therefore, approach with caution. Indeed any vaping study that is funded by a vaping company is often fobbed off as 'propaganda', and dismissed no matter how solid the findings!

The recent 2020 entry Comparison of Allen Carr's Easyway programme with a specialist behavioural and pharmacological smoking cessation support service: a randomized controlled trial has conclusions 'There was no clear evidence of a difference in the efficacies of the Allen Carr's Easyway (ACE) and specialist smoking cessation support involving behavioural support and pharmacotherapy'.

A much older appraisal of 'Easyway' exists, produced by Dr Jonathan Foulds is shown

"The bottom line is that anyone who claims they have an 80% or higher success rate in helping typical smokers to abstain long-term is kidding themselves or trying to fool you. Same goes for anyone claiming >50%, particularly if there is no pharmacological component to the intervention. This includes varenicline, e-cigs or anything else we currently have. Generally speaking, a 1-year quit rate above 10% is not bad, 20% is very good, and 25% is awesome."

His brief 1996 evaluation of 'Easyway' is re-produced here 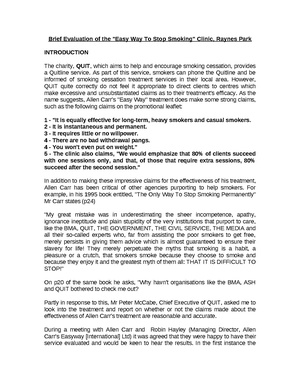 To attempt to provide an overall Summary by ourselves with such conflicting evidence is problematic, suffice to state that it works for significant numbers of people, but over-inflated success claims need treating with great caution.' Easyway' fits neatly into the preferred 'Cold-Turkey' category advanced by the anti-nicotine and anti-pharma. faction of Tobacco Control.

It is noted that neither NCSCT nor NHS Smokefree includes 'Easyway' as part of their package of approved methods for Quitting Smoking despite its existence for over two decades.

Cost of the 'Easyway' program

Costs of Stop Smoking Seminars are of the order £299, the small book ~£15, Free Advice

Retrieved from "https://safernicotine.wiki/mediawiki/index.php?title=Allen_Carr_%27Easyway%27&oldid=23654"
Category:
Cookies help us deliver our services. By using our services, you agree to our use of cookies.