FAQ: Who invented the ecig?

CASAA has maintained this historical timeline detailing the history of vaping for several years. This page is periodically updated with new events.

By James Dunworth via the Ashtray Blog

Ask most vapers about the history of e-cigarettes, and they’ll tell you it began in China, but the history goes back further than that.

"This paper investigates the fate of the Capillary Aerosol Generator(CAG), a nicotine aerosol device resembling modern e-cigarettes, developed by Philip Morris (PM) in 1994. A debate has emerged as to why this product never made it to market. In Donovan et al. v. Philip Morris USA, Inc., the sides presented opposing views in their arguments. To explore the reasons for CAG abandonment,we searched the Truth Tobacco Industry Documents database for key terms including ‘Capillary Aerosol,’ ‘Project LEAP’ (the project under which the CAG was housed), and ‘Tony Howell’ (CAG inventor). The results show that regulatory,legal, and political concerns deterred CAG development. A lack of progress even after these concerns had abated seems to reveal a larger reluctance to innovate non-tobacco products—perhaps due to concerns about competing against tobacco cigarettes. We also explored additional explanations such as technological barriers and lack of consumer interest." 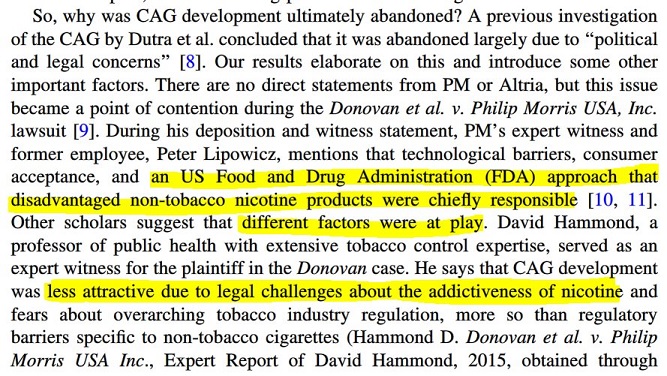 "Electronic cigarettes are advertised as the latest technological gadget-the smoking equivalent of smart phones. I challenge this sense of novelty by tracing their history to the 1960s, when researchers at British American Tobacco first recognized that smokers' brains were dependent on nicotine. This discovery enabled British American Tobacco to develop a novel kind of smoking device under the codename "Ariel" between 1962 and 1967."

Retrieved from "https://safernicotine.wiki/mediawiki/index.php?title=ENDS_History&oldid=5121"
Categories:
Cookies help us deliver our services. By using our services, you agree to our use of cookies.