The information below is derived from an American Vapour Manufacturers twitter thread, with additional information and links to further information added in this section.

wikipedia's Page on the Reagan-Udall Foundation

The Reagan-Udall page on the FDA review page, including links, plus information on progress and links to view the meetings.

As the Reagan-Udall Foundation undertakes its much-needed review of rampant dysfunction at FDA, the agency’s personnel are speaking out – and whey they have to say is shocking. Let’s take a look.

Using the comment portal that RUF set up, FDA personnel describe a broken culture, corrupt political influence, rigged processes, and retribution for anyone that tries to repair it. Their identities have been shielded.

There are courageous whistleblowers here from a variety of offices within FDA, all describing a broad pattern of unethical misconduct at the agency. Here are some of the highlights. 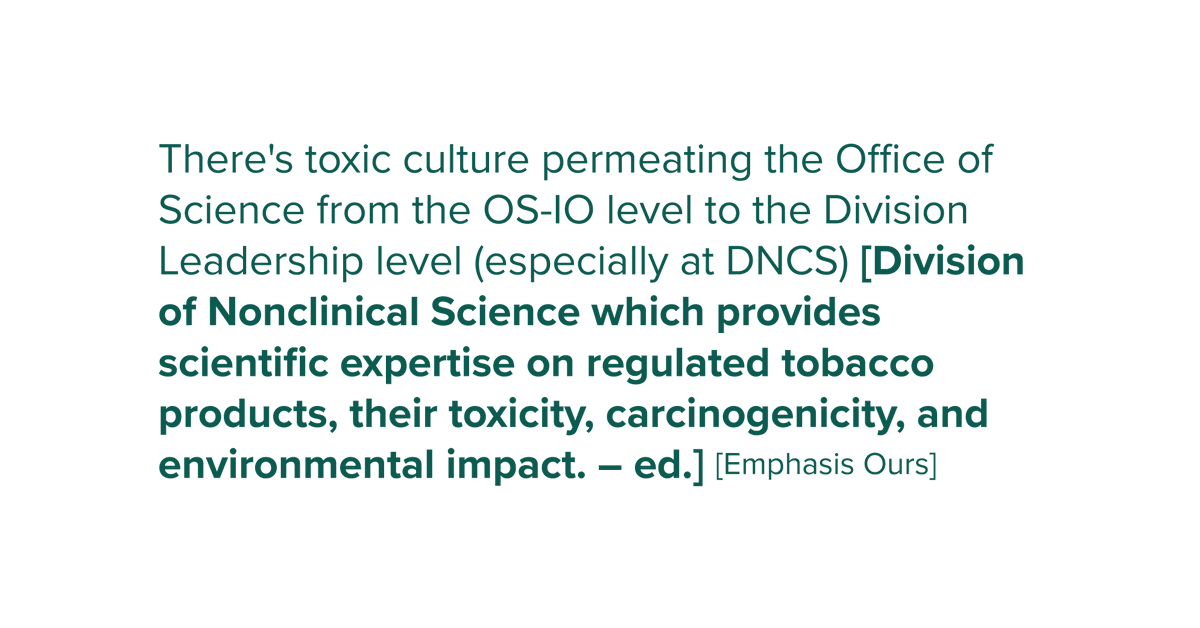 There's a toxic culture permeating the office of science from the OD-IO level to the division leadership level (especially at DNCS) [Division of Nonclinical Science this provides scientific expertise on regulated tobacco products, their toxicity, carcinogenicity, and environmental impact. -ed.

Ignoring the science and rigging the outcomes: 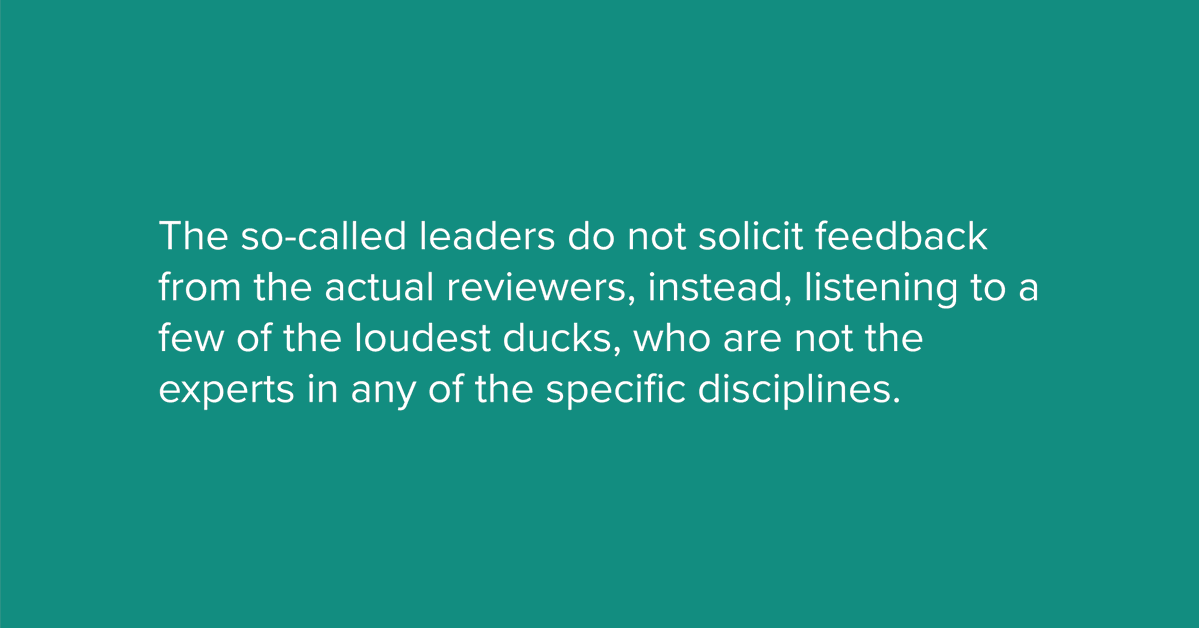 The so-called leader do not solicit feedback from the actual reviewers, instead, listening to a few of the loudest ducks, who are not the experts in any of the specific disciplines.

Dr. Califf postures as a champion of inclusion and diversity. But in reality: 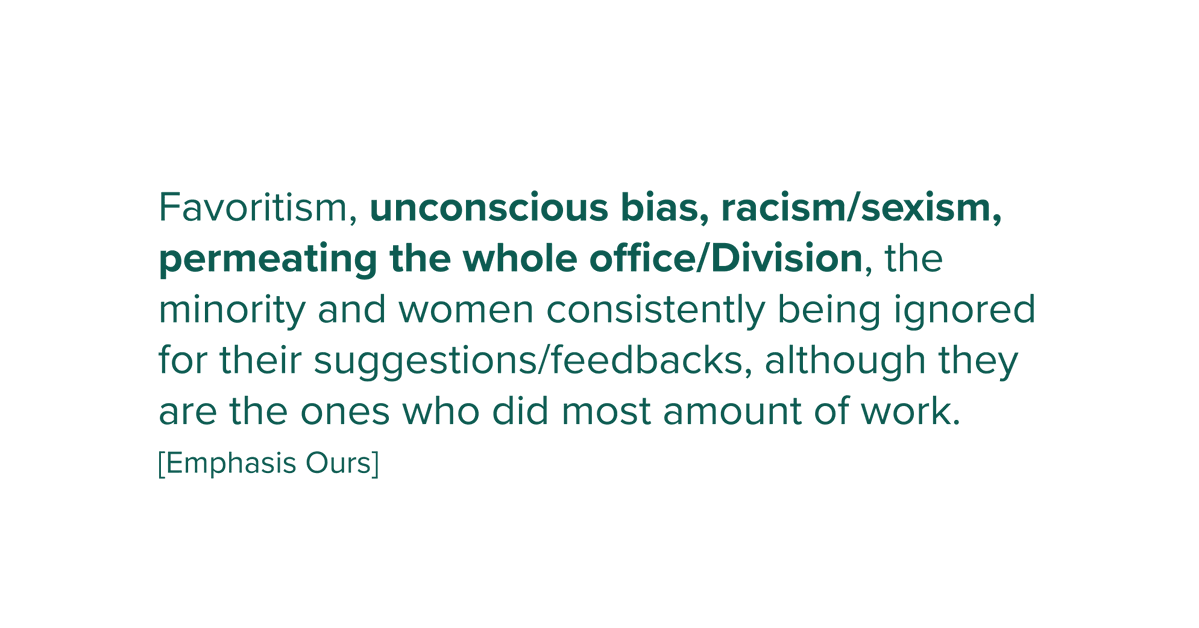 Favoritism, unconscious bias, racism/sexism, permeating the whole office/division, the minority and women constantly being ignored for their suggestions/feedbacks, although they are the ones who did the most amount of work.

And if the scientific review doesn’t comport with the preconceived outcome that FDA leaders want, they just replace the reviewer: 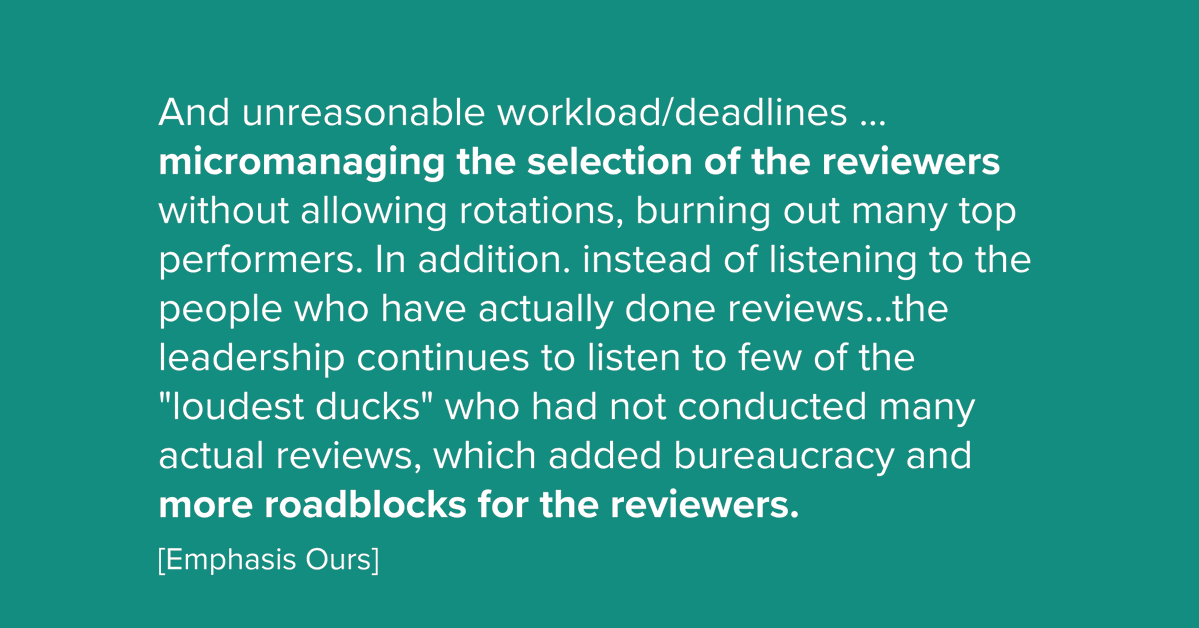 Naturally, this leads to infighting and jockeying among the people who are supposed to be doing objective analysis: 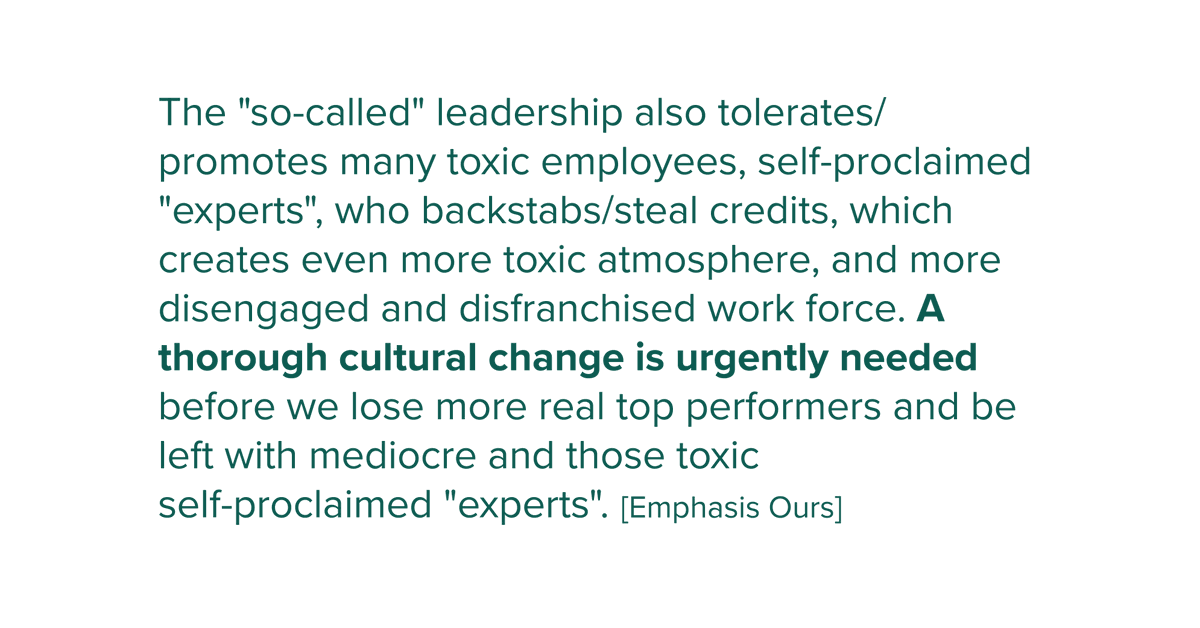 The "so-called" leadership also tolerates/ promotes many toxic employees, self-proclaimed "experts", who backstabs/steal credits, which creates even more toxic atmosphere, and more disengaged and disfranchised work force. A thorough cultural change is urgently needed before we lose more real top performers and be left with mediocre and those toxic self-proclaimed "experts".

Corrupt political influence infects that entire process. This is truly outrageous and further confirmation of the complaints we have lodged with HHS Inspector General and the Senate Ethics Committee. 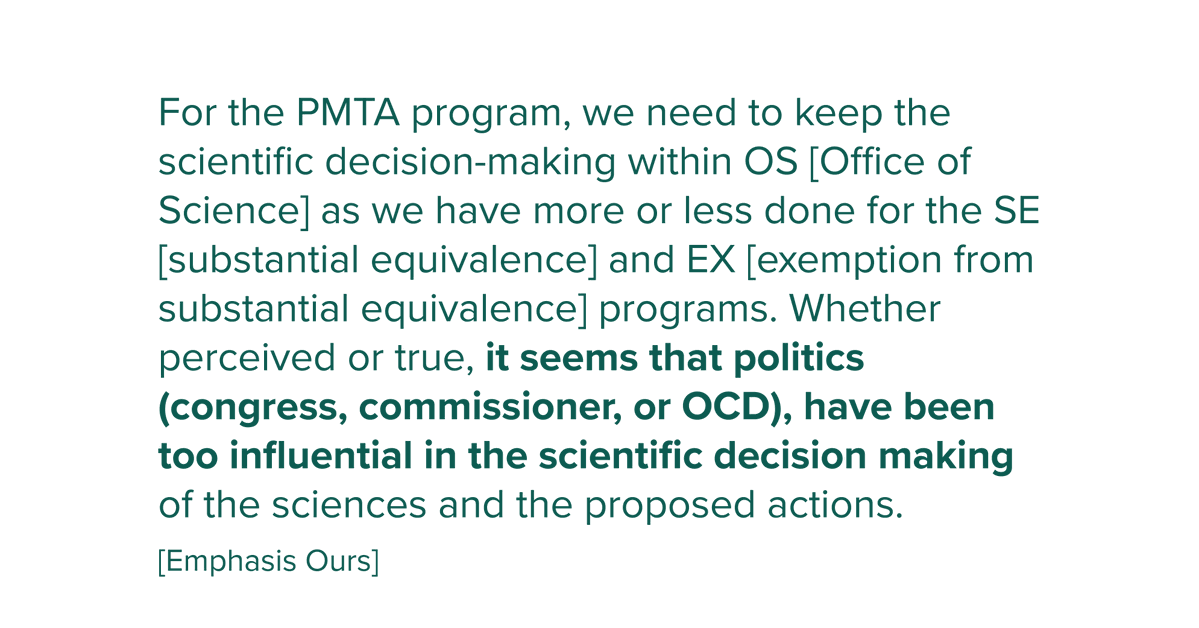 For the PMTA program, we need to keep the scientific decision-making within OS [Office of Science] as we have more or less done for the SE [substantial equivalence] and EX [exemption from substantial equivalence] programs. Whether perceived or true, it seems that politics (congress, commissioner, or OCD), have been too influential in the scientific decision making of the sciences and the proposed actions.

Scientific personnel are being actively and routinely intimidated. 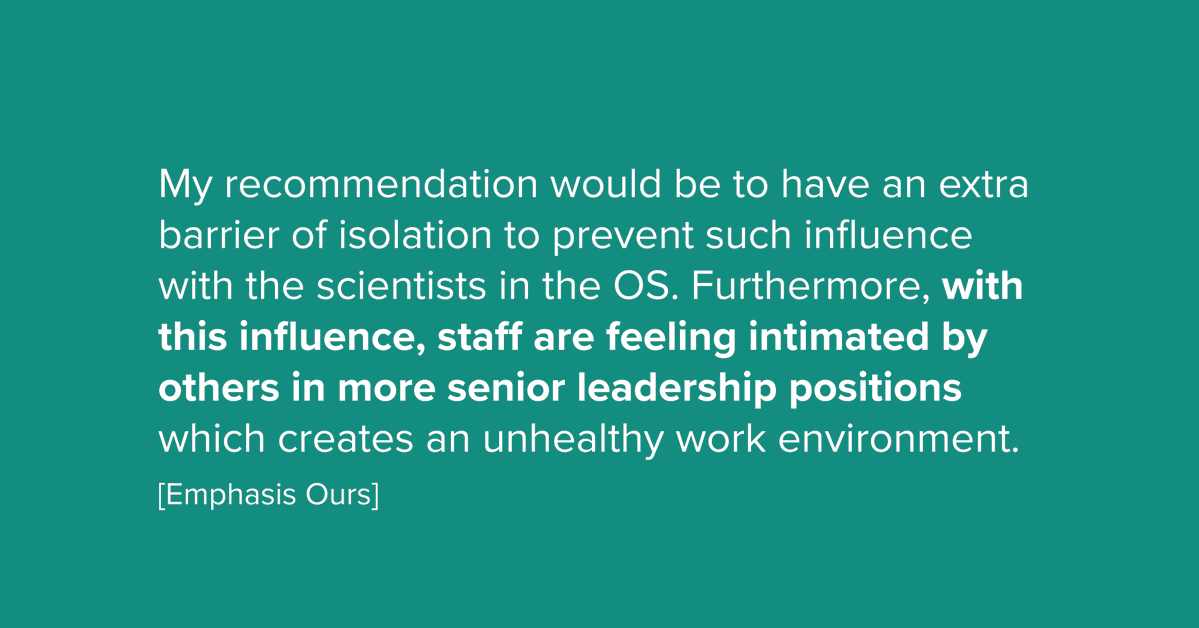 My recommendation would be to have an extra barrier of isolation to prevent such influence with the scientists in the OS. Furthermore, with this influence, staff are feeling intimated by others in more senior leadership positions which creates an unhealthy work environment.

Those personnel wish to do the right thing but the agency prevents them. 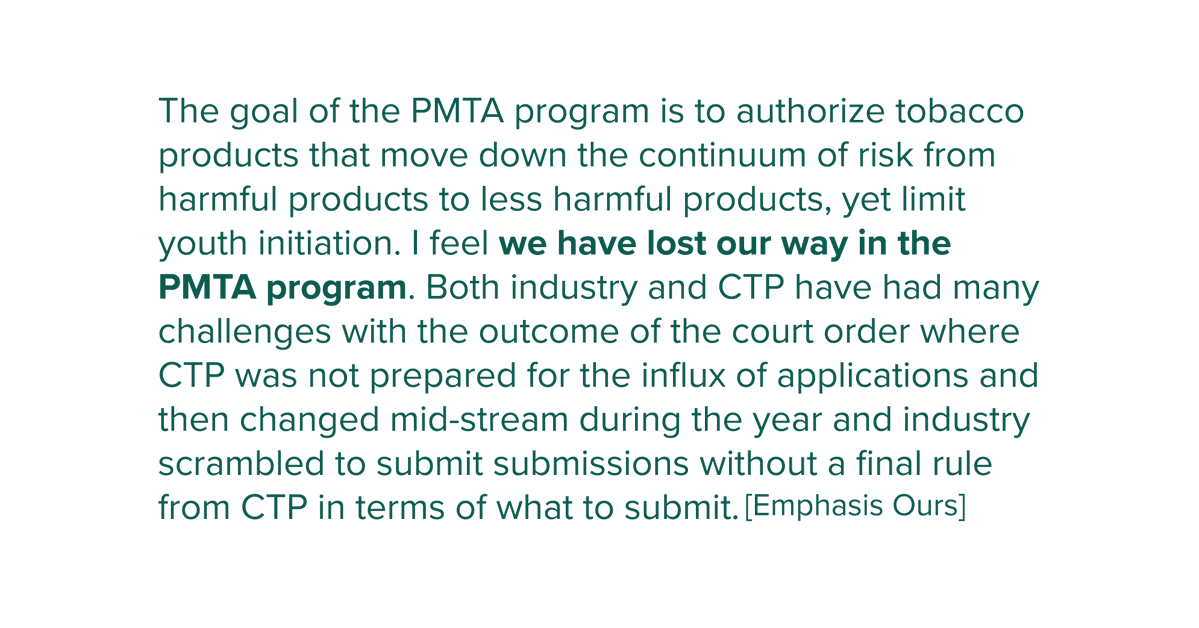 The goal of the PMTA program is to authorize tobacco products that move down the continuum of risk from harmful products to less harmful products, yet limit youth initiation. | feel we have lost our way in the PMTA program. Both industry and CTP have had many challenges with the outcome of the court order where CTP was not prepared for the influx of applications and then changed mid-stream during the year and industry scrambled to submit submissions without a final rule from CTP in terms of what to submit.

They know they system is rigged but there’s nothing they can do. 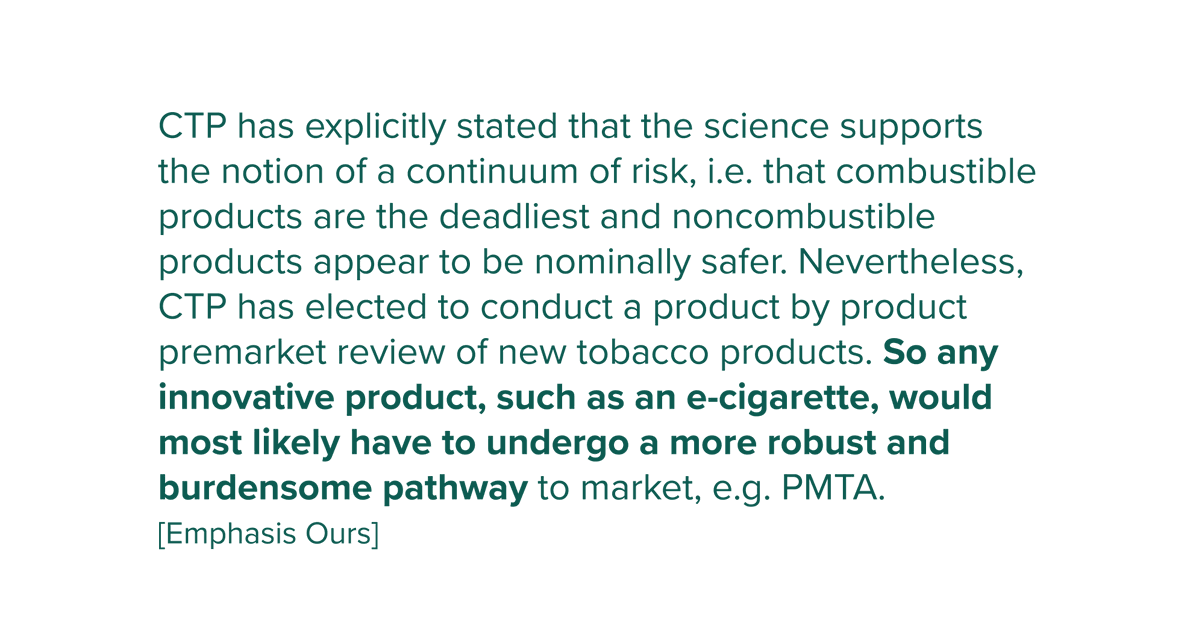 CTP has explicitly stated that the science supports the notion of a continuum of risk, i.e. that combustible products are the deadliest and noncombustible products appear to be nominally safer. Nevertheless, CTP has elected to conduct a product by product premarket review of new tobacco products. So any innovative product, such as an e-cigarette, would most likely have to undergo a more robust and burdensome pathway to market, e.g. PMTA.

They also know the agency’s corrupt approach is causing active public health harm but, again, no one will listen to them. 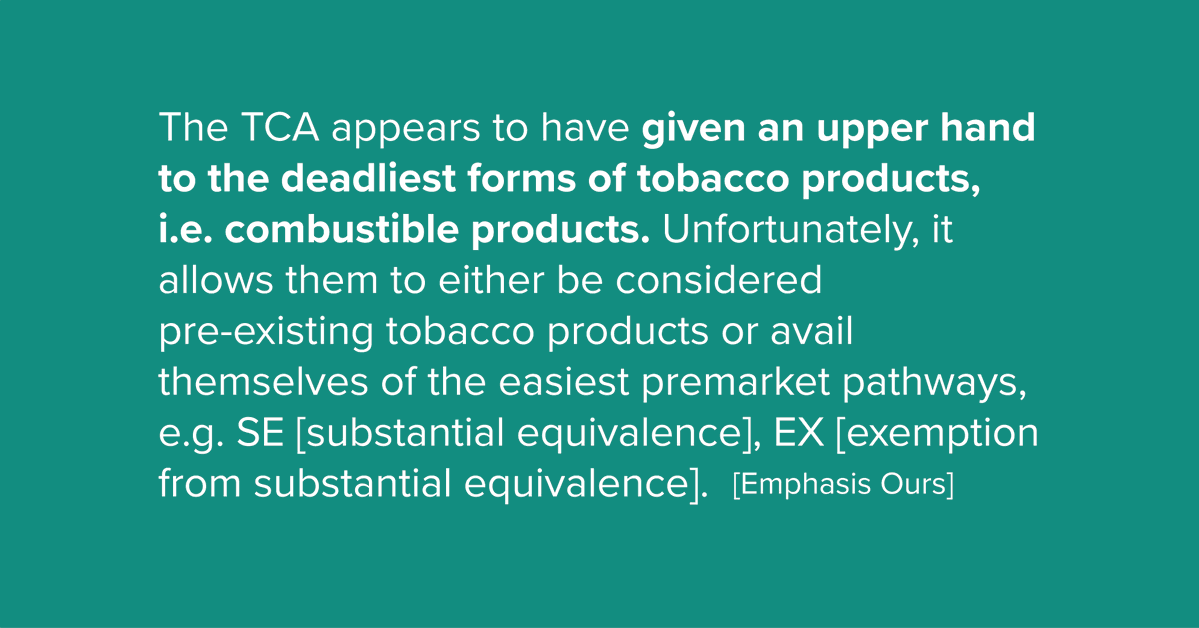 They are proposing fixes to the system but FDA leadership doesn’t care. 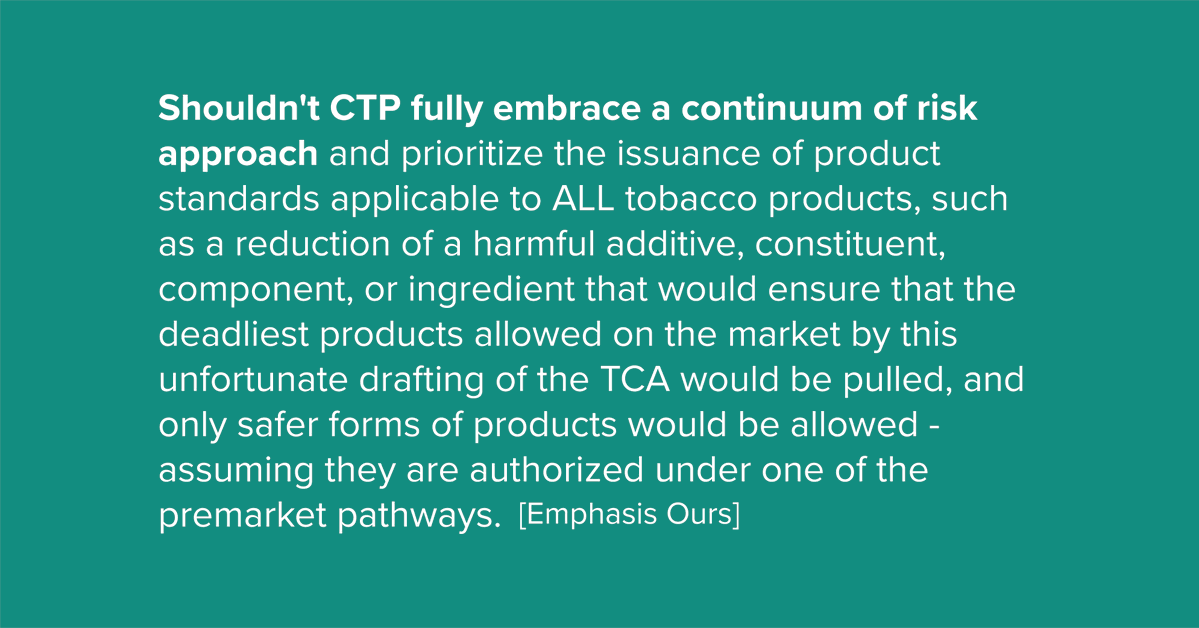 Shouldn't CTP fully embrace a continuum of risk approach and prioritize the issuance of product standards applicable to ALL tobacco products, such as a reduction of a harmful additive, constituent, component, or ingredient that would ensure that the deadliest products allowed on the market by this unfortunate drafting of the TCA would be pulled, and only safer forms of products would be allowed - assuming they are authorized under one of the premarket pathways. 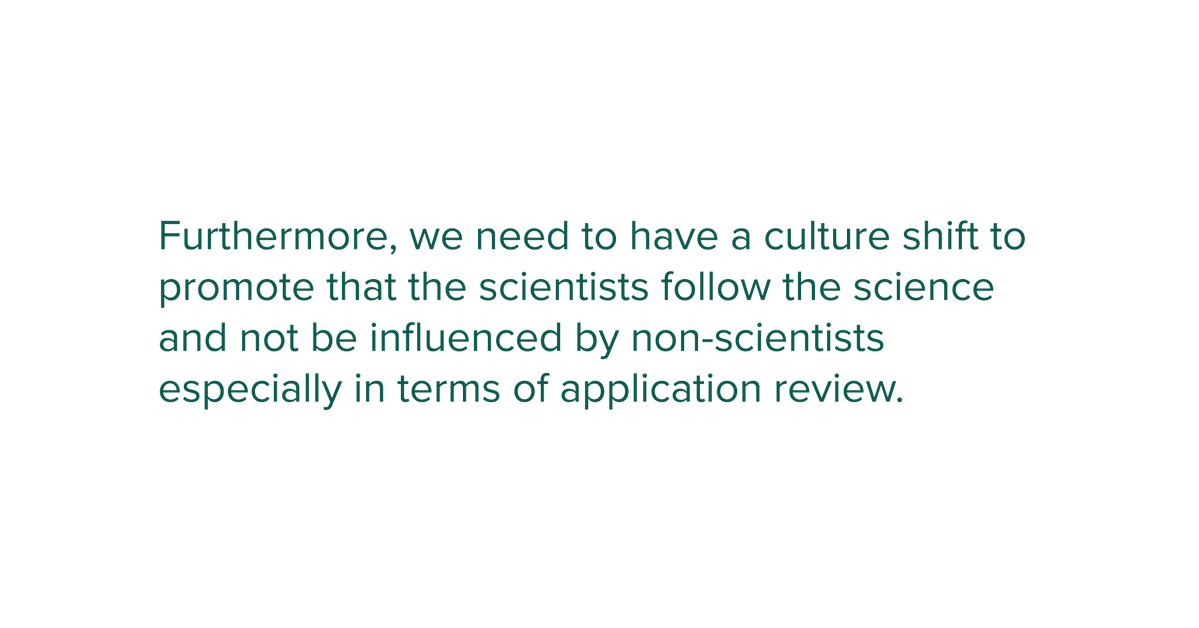 Furthermore, we need to have a culture shift to promote that the scientists follow the science and not be influenced by non-scientists especially in terms of application review.

Those who have tried to speak out internally are swiftly penalized or have their careers derailed. 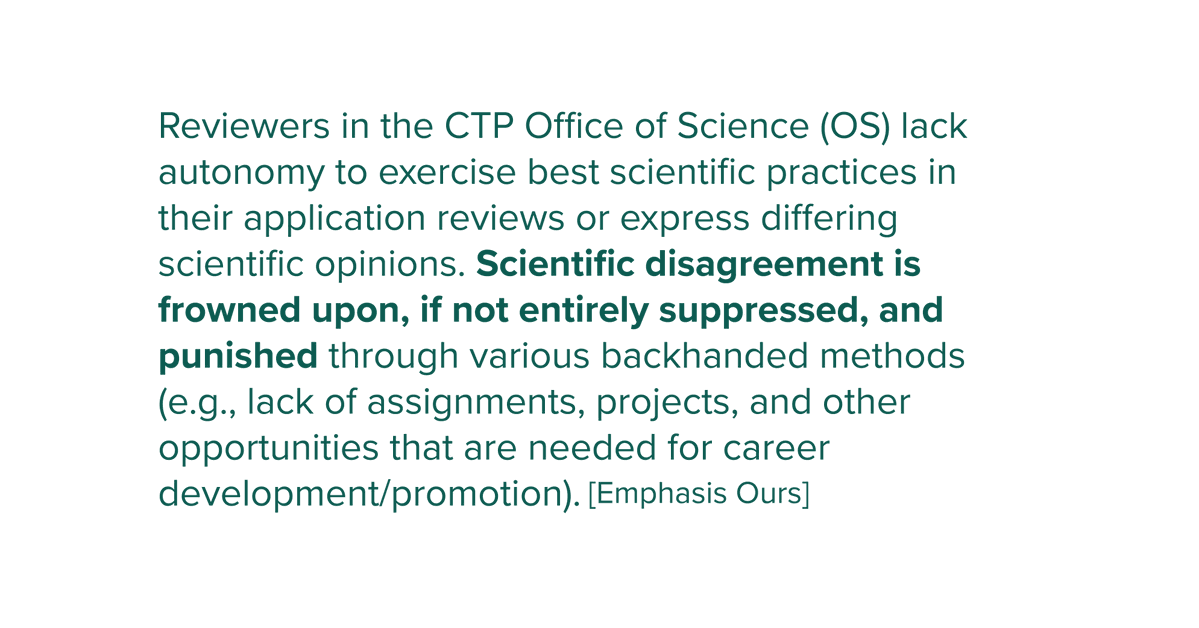 Reviewers in the CTP Office of Science (OS) lack autonomy to exercise best scientific practices in their application reviews or express differing scientific opinions. Scientific disagreement is frowned upon, if not entirely suppressed, and punished through various backhanded methods (e.g., lack of assignments, projects, and other opportunities that are needed for career development/promotion).

Leadership at FDA has violated their duty to the American public. This is the appalling culture that Mitch Zeller, Brian King, and Robert Califf have created: 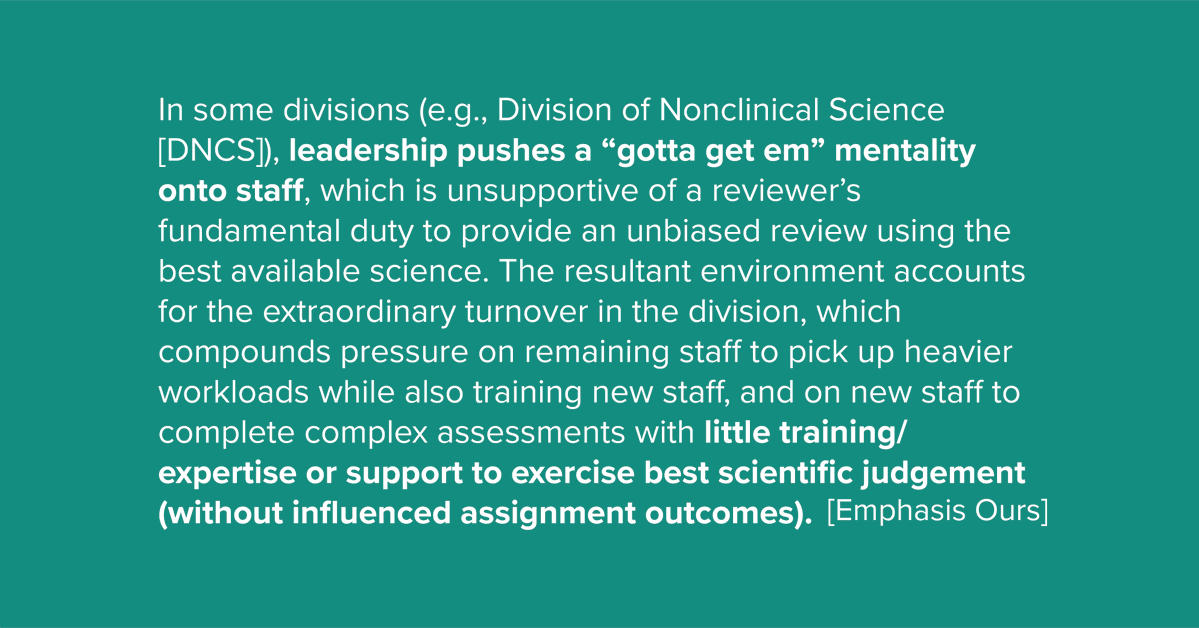 In some divisions (e.g., Division of Nonclinical Science [DNCS)), leadership pushes a “gotta get em” mentality onto staff, which is unsupportive of a reviewer’s fundamental duty to provide an unbiased review using the best available science. The resultant environment accounts for the extraordinary turnover in the division, which compounds pressure on remaining staff to pick up heavier workloads while also training new staff, and on new staff to complete complex assessments with little training/ expertise or support to exercise best scientific judgement (without influenced assignment outcomes).

Of course, those personnel are forbidden from dialogue with actual stakeholders. Memo to FDA: you can’t catch Covid over Zoom. 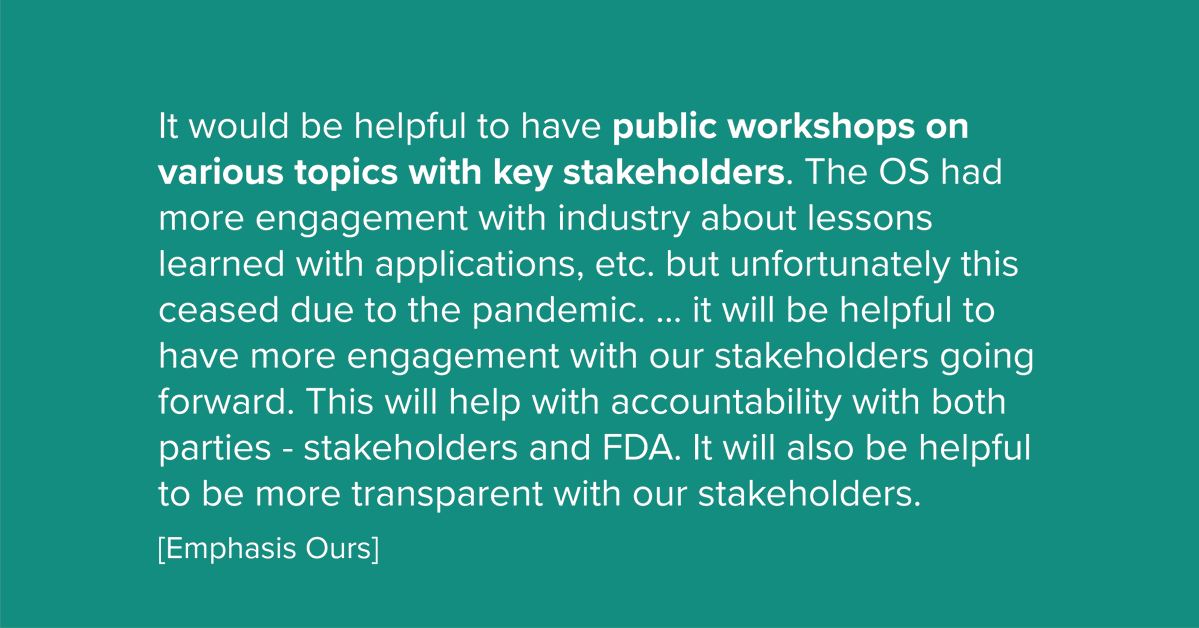 I guess when Senator Durbin or Matt Myers calls the head honcho with their latest demands, ya gotta hop to it. 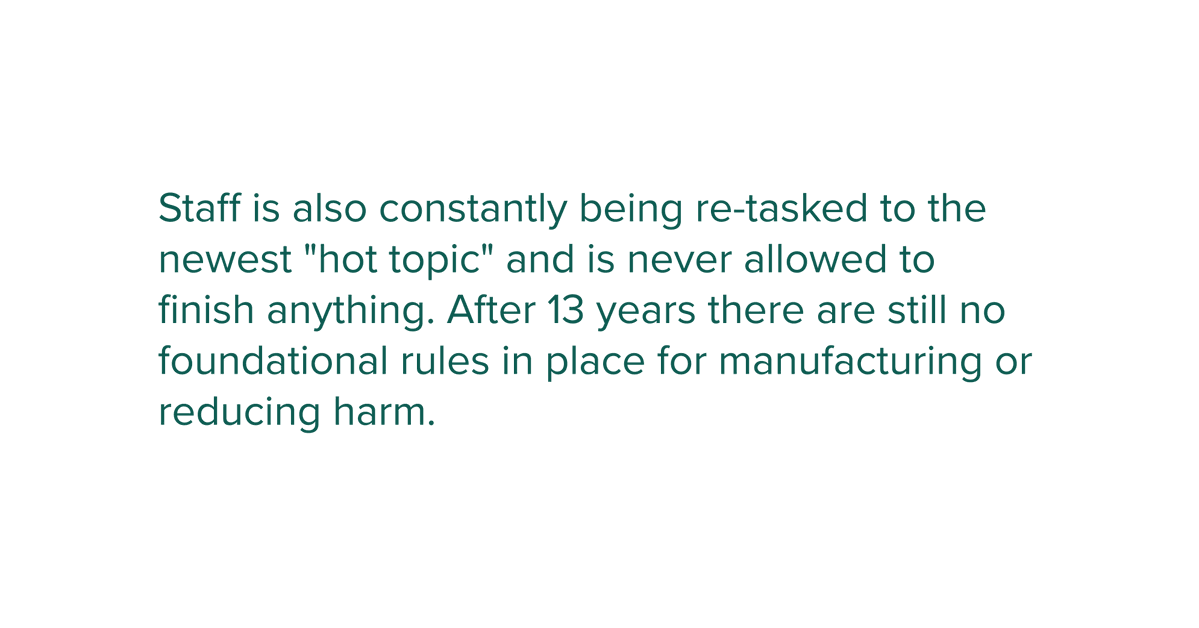 Staff is also constantly being re-tasked to the newest "hot topic" and is never allowed to finish anything. After 13 years there are still no foundational rules in place for manufacturing or reducing harm. 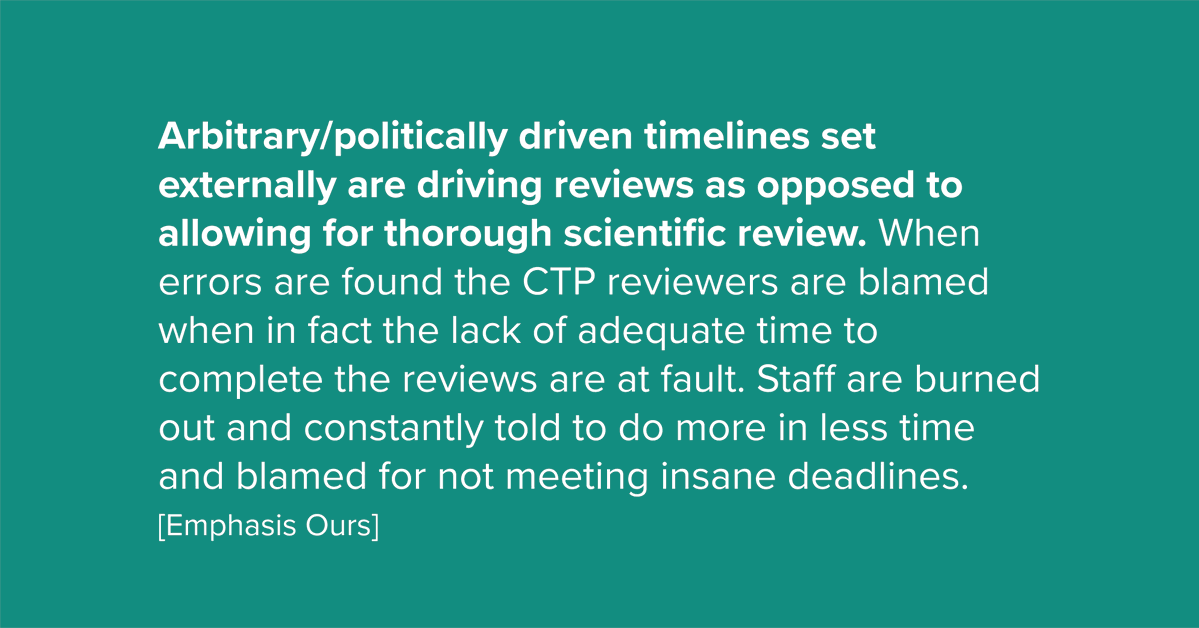 Arbitrary/politically driven timelines set externally are driving reviews as opposed to allowing for thorough scientific review. When errors are found the CTP reviewers are blamed when in fact the lack of adequate time to complete the reviews are at fault. Staff are burned out and constantly told to do more in less time and blamed for not meeting insane deadlines.

What happens when the reviewers concur with an application? 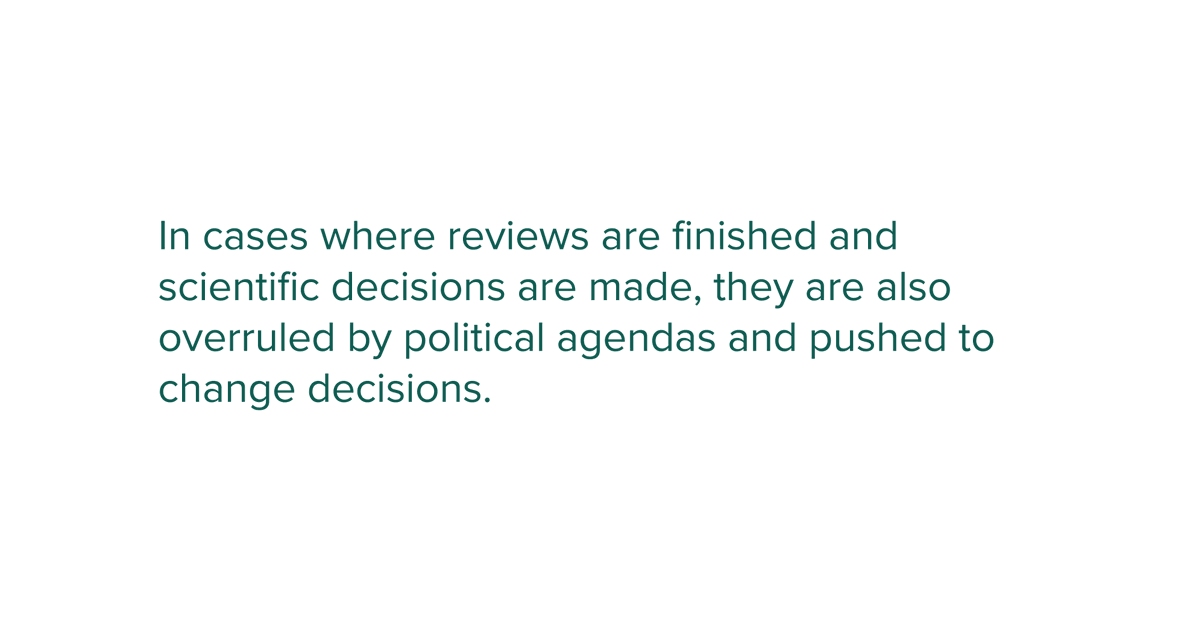 In cases where reviews are finished and scientific decisions are made, they are also overruled by political agendas and pushed to change decisions.

Here’s another and read it closely. Because of political pressure, FDA leadership is *altering* the scientific findings of its own staff and reversing their decisions. 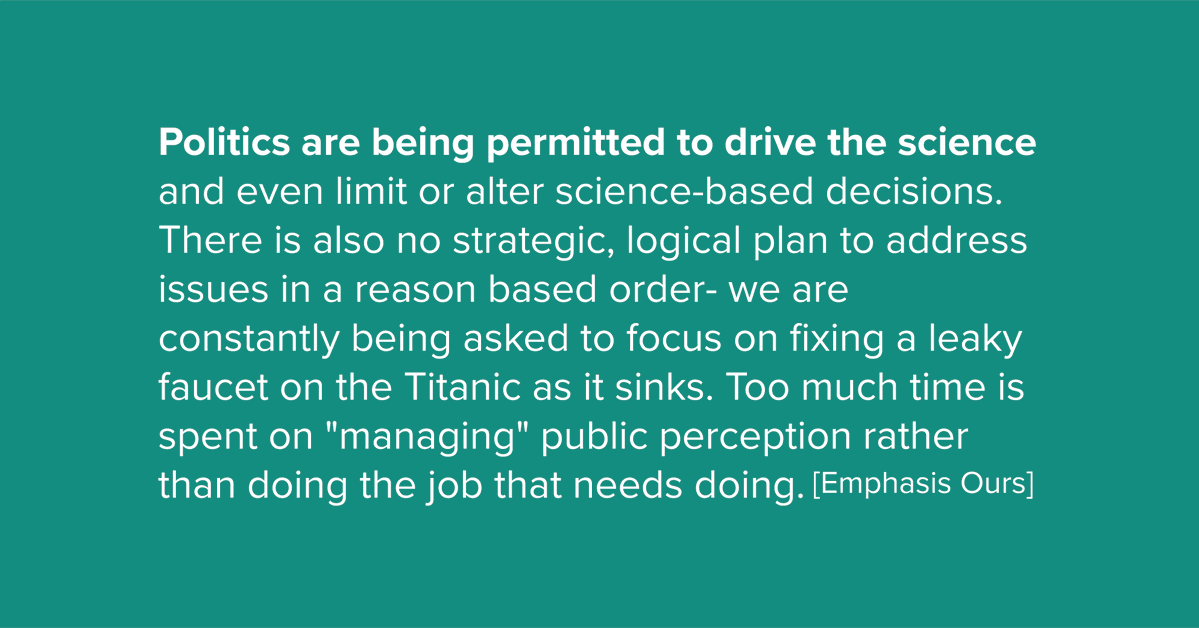 Politics are being permitted to drive the science and even limit or alter science-based decisions. There is also no strategic, logical plan to address issues in a reason based order- we are constantly being asked to focus on fixing a leaky faucet on the Titanic as it sinks. Too much time is spent on "managing" public perception rather than doing the job that needs doing.

Those personnel also point out that FDA is doing most of this in the absence of formal rulemaking – that is to say, unlawfully. Again, political pressure preventing that. 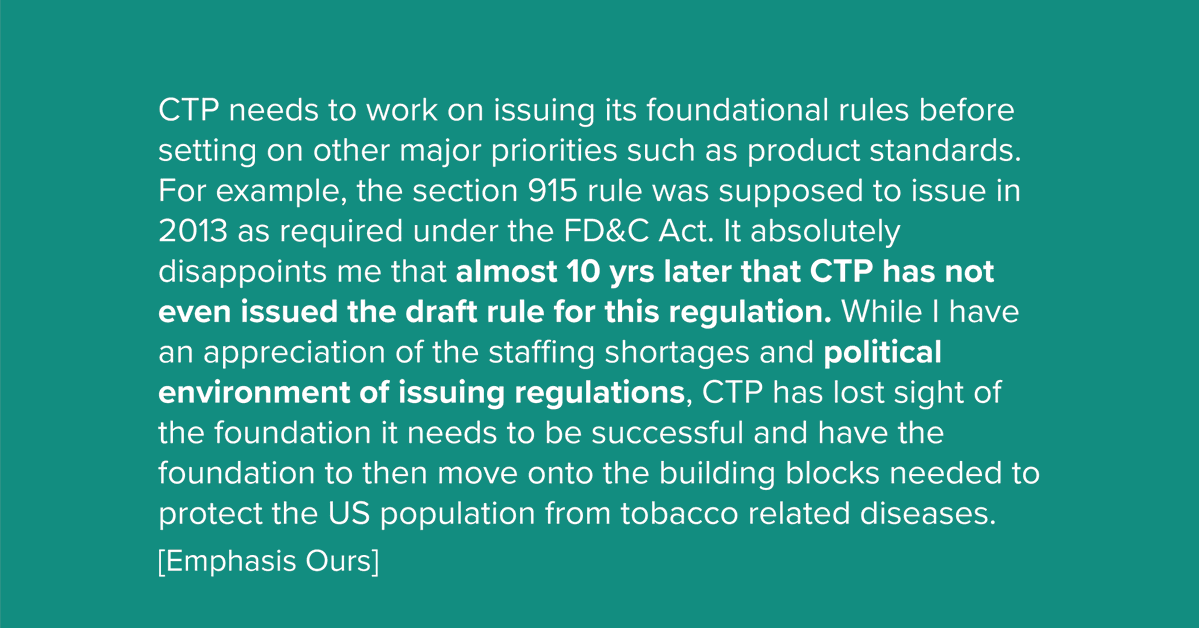 CTP needs to work on issuing its foundational rules before setting on other major priorities such as product standards. For example, the section 915 rule was supposed to issue in 2013 as required under the FD&C Act. It absolutely disappoints me that almost 10 yrs later that CTP has not even issued the draft rule for this regulation. While | have an appreciation of the staffing shortages and political environment of issuing regulations, CTP has lost sight of the foundation it needs to be successful and have the foundation to then move onto the building blocks needed to protect the US population from tobacco related diseases.

This deserves to be a major scandal and FDA leadership ought to be truly ashamed. It’s a total disgrace. But the FDA beat writers in the national press have done next to nothing to expose this corruption.

Why is it left to vaping advocates like us to bring this story to light? Why haven’t reporters at NYT, AP, WashPost, CBS, or Reuters tried to cultivate these sources and tell the American public what’s really going on inside that broken agency?

We know why NPR, STAT, TBIJ, and Bloomberg haven’t done it – it’s because they are on the prohibition payroll, taking outright cash payments from billionaires that are engineering the political influence. They condone this corruption and they sold out the public.

These whistleblowers are obviously keen to share their stories and their insight – but apparently no one in the national news media wants to hear it. Those outlets quote unnamed officials at federal agencies all the time. But here? No curiosity, zero effort.

Some people say AVM has been too tough on FDA. But does it still seem “hyperbolic” when we say the agency is rigging the process and is riddled with political influence? Even the agency’s own people can’t engage in a meaningful, constructive dialogue with their own colleagues!

Let’s wrap by applauding the integrity and courage of these FDA staff members. It takes real guts to speak out like this and here’s hoping they continue to stand tall.

Retrieved from "https://safernicotine.wiki/mediawiki/index.php?title=FDA_Reagan_Udall_foundation_investigation&oldid=24413"
Cookies help us deliver our services. By using our services, you agree to our use of cookies.