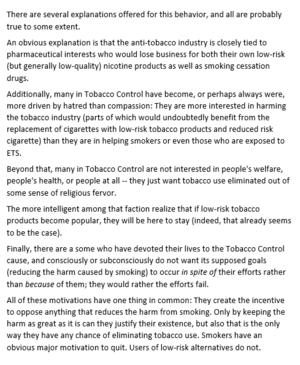 The exact opposite in terms of funding and content is Tobacco Control Tactics who challenge the findings and rationale of the other group. One particular perceptive and telling quotation from that entry is contained to the right in a screen cap from twitter.

Retrieved from "https://safernicotine.wiki/mediawiki/index.php?title=Funded_Watchdogs_and_Counters&oldid=4859"
Category:
Cookies help us deliver our services. By using our services, you agree to our use of cookies.