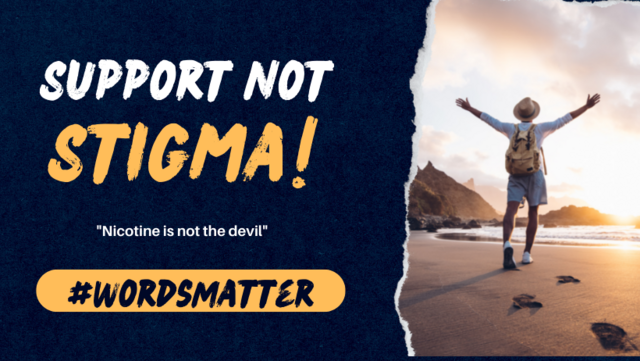 Stigma and stigmatizing language lead to viewing people as less worthy and can lead to bias, racism, and discrimination. Stigma can affect the mental health of the stigmatized, may inhibit their ability to achieve wanted changes in their lives, and may cause them to avoid medical care or helpful services.

Smoking (Nicotine) Stigma and the use of "Smoker"

2021: E-Cigarette Summit: Stigma and tobacco harm reduction: what we can learn from other health behaviors

2021: Internalized stigma among cancer patients enrolled in a smoking cessation trial: The role of cancer type and associations with psychological distress

2020: Changing the Language of How We Measure and Report Smoking Status: Implications for Reducing Stigma, Restoring Dignity, and Improving the Precision of Scientific Communication

2020: Stigma, Opioids, and Public Health Messaging: The Need to Disentangle Behavior From Identity

2016: Exploring Issues of Comorbid Conditions in People Who Smoke

2013: Partners in Change Report on participation in a health behaviour change course to address smoking in pregnancy in support of a fair and equal Tasmania

2013: After the Smoke Has Cleared: Reflections from a Former Smoker and Tobacco Researcher

2022: How to Reduce Mental Health Stigma, Smoking Stigma in the Workplace

2021: A New Guide Encourages the Use of Language that is Respectful of Patients, Free of Stigma, Inclusive, and Equitable

Tweets about discontinuing the use of "Smoker"

Examples of an alternative to "smoker" - PWS (People Who Smoke)

2022: Smoking and social housing from LIN and ASH

2022: What low-income smokers have learned from public health pedagogy: A narrative inquiry

2020: Stigma and Smoking in the Home: Parents’ Accounts of Using Nicotine Replacement Therapy to Protect Their Children from Second-Hand Smoke

2019: DOES IT HELP SMOKERS IF WE STIGMATIZE THEM? A TEST OF THE STIGMA-INDUCED IDENTITY THREAT MODEL AMONG U.S. AND DANISH SMOKERS

2018: Smoking-Related Stigma: A Public Health Tool or a Damaging Force?

2015: Validity and Reliability of the Internalized Stigma of Smoking Inventory: An Exploration of Shame, Isolation, and Discrimination in Smokers with Mental Health Diagnoses

2009: The Psychological Effects of Social Stigma: Applications to People with an Acquired Hearing Loss

2008: Tobacco control and the inequitable socio-economic distribution of smoking: smokers’ discourses and implications for tobacco control

2018: A qualitative review of tobacco research related to public and structural stigma.

2016: Smoking Cessation and the Role of Stigma: A Systematic Review

2015: The Downside of Tobacco Control? Smoking and Self-Stigma: A systematic review

2008: Smoking and the emergence of a stigmatized social status

2019: Communicating about Substance Use in Compassionate, Safe and Non-Stigmatizing Ways

2018: “Blacklists” and “whitelists”: a salutary warning concerning the prevalence of racist language in discussions of predatory publishing

2013: The Racial History Of The 'Grandfather Clause'

2021: Media framing of emergency departments: a call to action for nurses and other health care providers

2020: A Primer to Reduce Substance Use Stigma in the Canadian Health System

2019: Biased labels: An experimental study of language and stigma among individuals in recovery and health professionals

2018: Considerations for substance-use disorder language: cultivating a shift from 'addicts in recovery' to 'people who thrive'

2018: Substance use, recovery, and linguistics: The impact of word choice on explicit and implicit bias

2017: Stigma Experienced by Children and Adolescents With Obesity

2013: Stigmatizing harm reduction through language: a case study into the use of "addict" and opposition to supervised injection sites in Canada

2022: Time to quit using the word “smoker”: Reflecting on the role of language in advancing the field of nicotine and tobacco research

2022: A Person-Centered Approach to Moralization—The Case of Vaping

2012: Crossing the Smoking Divide for Young Adults: Expressions of Stigma and Identity Among Smokers and Nonsmokers

2006: Pollution, peril and poverty: a British study of the stigmatization of smokers

Statements about people who smoke found on the internet

Retrieved from "https://safernicotine.wiki/mediawiki/index.php?title=Nicotine_-_Stigma&oldid=27326"
Cookies help us deliver our services. By using our services, you agree to our use of cookies.