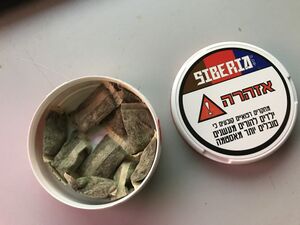 Snus is a tobacco product (pouch) which the user places  in the mouth between the gum and cheek. No combustion is involved. Once in place, the saliva and general moistness of the mouth work to release the nicotine into the system. This process does not require any form of combustion. For other smokeless tobacco products try the SLT page.

Is snus an appropriate and acceptable harm reduction product?

Snus fulfils the criteria for a tobacco harm reduction product. It is a low risk nicotine product and delivers acceptable doses to those who use it. In countries in which it is allowed it is popular and has contributed to declines in smoking and smoking related diseases.

The human cost of the ban on snus

Snus may be banned in some locations, legal in others. It's use is not common, other more harmful oral tobacco is used more often.

Illegal to sell in the EU (excluding Sweden), but purchase and use is not illegal (unclear if just due to tobacco industry track record, general opposition to proliferation of further tobacco products, preempting regulation for geographically restrained appeal, or even pharma influence).

Snus is legally on the market only in Sweden. The minimum age to purchase is 18 years of age.

Illegal in the UK, but calls have been made by Appgvaping to legalise it's sale. Snus is reasonably easy to obtain in the UK, from sources on social media, and can be ordered online. Little to no enforcement appears to be carried out to block it's transit through customs, or to stop it's use.

The US FDA has authorized the marketing of products through the modified risk tobacco product (MRTP) pathway. The authorizations are for eight Swedish Match USA, Inc. snus smokeless tobacco products sold under the “General” brand name.

FDA authorizes the manufacturer to market these specific products with the claim “Using General Snus instead of cigarettes puts you at a lower risk of mouth cancer, heart disease, lung cancer, stroke, emphysema, and chronic bronchitis.”

The FDA’s review determined that the claim proposed by the company in its application is supported by scientific evidence, that consumers understand the claim and appropriately perceive the relative risk of these products compared to cigarettes, and that the modified risk products, as actually used by consumers, will significantly reduce harm and the risk of tobacco-related disease to individual tobacco users and benefit the health of the population as a whole.

The most popular source  of Nicotine consumed globally is still combustion cigarettes. Cigarettes make up 92% of all tobacco and nicotine products sold.

Smoke from combustion cigarettes  up of over thousands of chemicals, including at least 70 known to cause cancer. These cancer-causing chemicals are referred to as carcinogens.

Safer Nicotine  Products  like Snus make tobacco  use safer by eliminating  all these carcinogens and only  delivering  Nicotine  without  necessary  the process  of combustion.

"Oral mucosal lesions are commonly found in Swedish smokeless tobacco (snus) users where the pouch is placed. These lesions are reversible, that is, clinical and histological tissue changes return to normal following cessation."

"The main aim of this study was to investigate how the oral mucosa was affected if users substituted their regular Swedish snus with non-tobacco-based nicotine products (investigational products)."

"Because of these circumstances, the extent to which the use of the investigational non-tobacco-based nicotine pouch may cause mucosal lesions similar to those produced by regular, tobacco-based snus is unclear. "

"Cigarette smoking but not Swedish snus dipping was associated with an increased risk of PAD (peripheral artery disease)."

* Snus for a long time has been the most preferred method for quitting smoking among successful quitters (see figure 2) in this report:

* Former smokers make up a large segment among snus users

* Dual users of snus and cigarettes consume fewer cigarettes, and a higher proportion portray themselves as smoke-free in the future than do exclusive cigarette smokers.

* Among current snus users who had quit smoking, 83% reported that snus was used in their final quit attempt

* Snus use was found to be a “stand-alone” cessation aid, and only weakly associated with the use of other cessation aids.

Suggestions to Add to This Page

2021: Smoking and snus use among Norwegian students: Demographic, personality and substance use characteristics

Retrieved from "https://safernicotine.wiki/mediawiki/index.php?title=Snus&oldid=27007"
Categories:
Cookies help us deliver our services. By using our services, you agree to our use of cookies.