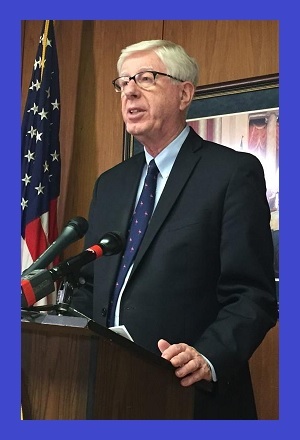 He has written and spoke extensively on the need for a continuum risk approach to regulations pertaining to vapor products.

Attorney General Tom Miller is serving in his 10th four-year term as Attorney General of Iowa. He is the longest currently serving attorney general in the nation. He received his law degree from Harvard Law School in 1969. Mr. Miller served as a VISTA volunteer in Baltimore, Maryland, for two years, and then as legislative assistant to U.S. Representative John C. Culver (D-IA). He returned to the Baltimore Legal Aid Bureau as legal education director, and he also taught part-time at the Maryland School of Law. Mr. Miller opened a law practice in McGregor in northeast Iowa and served as city attorney of McGregor and Marquette. He has served as President of the National Association of Attorneys General (NAAG).

He was actively involved in the establishment of the Tobacco Master Settlement Agreement and has been a fierce and determined critic of the Tobacco Industry over many years. Tom Miller served on the Board of the Truth Initiative (American Legacy Foundation)

He served on the Board of Directors of the American Legacy Foundation / Truth Initiative.

Retrieved from "https://safernicotine.wiki/mediawiki/index.php?title=Tom_Miller&oldid=5928"
Categories:
Cookies help us deliver our services. By using our services, you agree to our use of cookies.