Here we take a look at busting myths and debunking junk science about nicotine or products containing nicotine.

The link between ever, but not current, ecigarette use and COVID-19 suffers from biological implausibility.

A number of experts responded swiftly to the study's abnormal findings that lacked a credible causal theory.

2016: Truth New Study on E-Cigarettes and Bronchitis: An Example of Scientific Dishonesty and Deception

2018: Truth Paper: E-cigarette flavors and aldehyde emissions: another failure to verify findings from a previous study

2018: Truth Influence of electronic cigarette vaping on the composition of indoor organic pollutants, particles, and exhaled breath of bystanders

Obviously, smokers or vapers do not hold their breath for 20 seconds before exhaling the breath. Thus, the study probably overestimated the absorption rate of VOCs present in cigarette smoke or e-cigarette aerosol.
The results of the study basically showed that indoor air and normal exhaled breath contains more VOCs that the e-cigarette aerosol.

Tobacco cigarette smoke provided the samples containing highest concentrations of all compounds analyzed. Besides nicotine it contained benzene, toluene, xylenes, ethylbenzene and naphthalene in high abundance as well as other compounds such as isoprene, pent-1-ene, n-pentane, n-hexane, n-heptane and others.
This composition was in strong contrast with that of vapor from the e-cigarettes in which all these compounds were virtually absent except nicotine

2014: Truth Comparison of Select Analytes in Exhaled Aerosol from E-Cigarettes with Exhaled Smoke from a Conventional Cigarette and Exhaled Breaths

2019: Truth Article: The US vaping flavour (flavor) ban: twenty things you should know

A well researched article that touches on many of the myths and fears about youth use of flavored vapor products.

We would like to point out that the finding is in a stark contrast to previous results.
The high levels only happen under dry puff conditions, something avoided by vapers as it is very unpleasant.

2017: Truth E-cigarettes emit very high formaldehyde levels only in conditions that are aversive to users: A replication study under verified realistic use conditions

While direct replications like this and studies with similar methods can offer useful comparisons, the main point of the paper isn’t as much about the results as it is about the methods. Before we can really answer the key questions, we need to consider why the method used matters so much.

2021: Truth E-cigarettes as an introduction to cigarette smoking?

The recent studies claiming vaping leads to smoking only prove that youths experiment, and they cannot show the true cause behind teen smoking, which is at a record low.

The Chaffee article emphasizes odds ratios but omits or obscures important contextual information. While teens who try one tobacco product are more likely to try another, the dominant gateway in the PATH survey was from no previous tobacco use to cigarettes.

The hysteria over vaping allegedly serving as a gateway to smoking for teens is unfounded and goes against scientific evidence, according to a new study.

2016: Truth Blog: How not to be duped by gateway effect claims

There are just too many desperately biased academic papers making ridiculous claims based on data and methods that could never describe a gateway effect. We should be looking at what is happening to the main trends in youth smoking, and this shows rapid declines in smoking and at a faster rate as vaping has risen. When you look at the full picture the data far more consistent with the vaping gateway being an ‘exit’ from smoking than an entrance.

2015: Truth Gateway Effects: Why the Cited Evidence Does Not Support Their Existence for Low-Risk Tobacco Products (and What Evidence Would)

Studies like the 2018 one from the Johns Hopkins Bloomberg School of Public Health claimed they found substantial levels of toxic heavy metals in eliquid and vapour. The results have then been used as part of overexcited lectures to the media by the likes of the lamentable Bonnie Halpern-Felsher. A study from researchers at West Virginia University pours cold water over the argument by finding that vapers’ blood and urine matches those who neither vape or smoke.

“The ‘significant amount’ of metals the authors reported they found were measured in ug/kg. In fact, they are so low that for some cases (chromium and lead) I calculated that you need to vape more than 100 ml per day in order to exceed the FDA limits for daily intake from inhalation medications.” He suggested that this happens because studies sometimes use concentration limits associated with constant intake, as opposed to just the breaths that include e-liquid vapor. According to Farsalinos, “humans take more than 17,000 breaths per day but only 400-600 puffs per day from an e-cigarette.” So when researchers calculations omit this fact, the results can appear drastically worse than they ought too.

Based on currently available data, overall exposure to metals from EC use is not expected to be of significant health concern for smokers switching to EC use, but is an unnecessary source of exposure for never-smokers. Metal analysis should be expanded to more products and exposure can be further reduced through improvements in product quality and appropriate choice of materials.
Article about above study: Metals emitted from e-cigarettes are NOT a reason for health concern

2020: Retraction Explanation: Retraction to: Electronic Cigarette Use and Myocardial Infarction Among Adults in the US Population Assessment of Tobacco and Health

Given these issues, the editors are concerned that the study conclusion is unreliable.
The editors hereby retract the article from publication in Journal of the American Heart Association

Comments and questions from experts around the world

Includes and excellent time line of events with links.

Dr Farsalinos: “Increasing the risk” means that someone is FIRST exposed to a condition (in this case, exposed to e-cigarette use) and THEN, BECAUSE OF THIS EXPOSURE, he/she develops disease. Both studies CANNOT provide any of this information to substantiate an increased risk. Both are cross-sectional surveys, meaning that they asked participants if they have heart disease and if they use e-cigarettes. The studies provide no information on whether e-cigarette use was initiated before (and how long before) or after the development of disease. What if participants used e-cigarettes after they developed the disease in order to quit smoking?

2016: Truth Comment: Response to stories suggesting that vaping is as bad for the heart as cigarettes

Professor Peter Hajek: “The study is reporting on a well-known short-term effect of nicotine – stiffening of arteries – that accompanies all types of stimulation. The same effect is generated by watching a thriller or a football match or sitting an exam. Drinking a cup of coffee actually produces a larger response of much longer duration. The key heart health risks of smoking are not caused by nicotine but by other chemicals in tobacco smoke that are not present in e-cigarette vapour.”

Capital Research Center
Covers many of the accusations made towards the ENDS industry and compares them to several adult consumer products and adult activities.

2020: Lung Foundation Australia continues to mislead the public about vaping

2019: New tobacco products, a threat for tobacco control and public health of Mexico

2019: Response to “New tobacco products, a threat for tobacco control and public health of Mexico”

2019: Association of E-Cigarette Use With Respiratory Disease Among Adults: A Longitudinal Analysis

2019 :The Evidence of Electronic Cigarette Risks Is Catching Up With Public Perception

2018: Clearing up some myths around e-cigarettes

2011: If the data contradict the theory, throw out the data: Nicotine addiction in the 2010 report of the Surgeon General

Graphics and Memes about Nicotine Myths 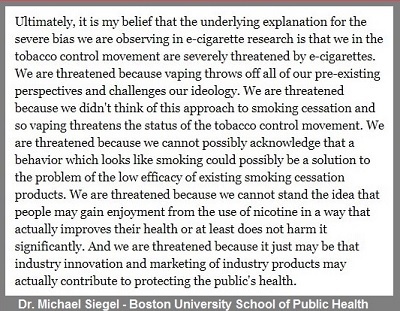 There is a false accusation that Cotton Candy flavors are made to market ENDS products to children. The truth is, that adults find the flavor very appealing. 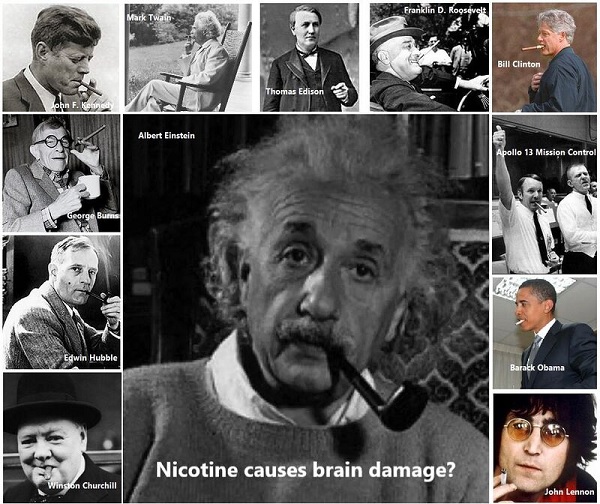 If nicotine causes brain damage, how do we explain the accomplishments of these people?

Suggestions of items to add to this page

2020: E-Cigarettes and Respiratory Disease: A Replication, Extension, and Future Directions

2020: Article: Most Young People Do Not Vape, and Even Fewer Vape Regularly

2020: The Relationship Between Electronic Cigarette Use and Conventional Cigarette Smoking Is Largely Attributable to Shared Risk Factors

2018: The Role of Nicotine Dependence in E-Cigarettes' Potential for Smoking Reduction

2017: Evaluating the mutual pathways among electronic cigarette use, conventional smoking and nicotine dependence

2015: Truth Blog: Is “ecigs are a gateway” the new “addiction”? (i.e., fiercely debated in the absence of defining the term)

2015: Truth Statement: settings Open AccessArticle Gateway Effects: Why the Cited Evidence Does Not Support Their Existence for Low-Risk Tobacco Products (and What Evidence Would)

2015: Truth Blog: JAMA paper finds some adolescents experiment with stuff – so what?

2014: Truth Evaluation: Youth Experimentation With e-Cigarettes Another Interpretation of the Data

2013: Truth Blog: We need to talk about the children – the gateway effect examined

Retrieved from "https://safernicotine.wiki/mediawiki/index.php?title=Myth_Busting&oldid=5862"
Categories:
Cookies help us deliver our services. By using our services, you agree to our use of cookies.