It is possible to access and edit Wikipedia on multiple types of devices, such as desktop computers, tablets and smartphones through several different methods, including options for older devices, modern apps for various platforms and options to view content while offline. This is intended for those who want to read and edit on the go.

Official applications can be found at: 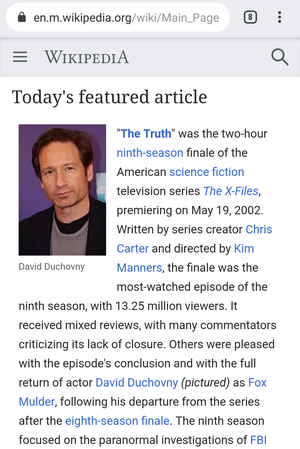 Mobile Wikipedia on Chrome for Android

The mobile version of Wikipedia is located at https://en.m.wikipedia.org.

Tablets are served a slightly modified version of the mobile site, which makes use of the larger screen size to e.g. show a table of content and display all article sections open by default

This mobile version is available for all languages of Wikipedia. It is actively developed, supported and translated. It supports editing; visit any article and you'll see a pencil icon on every section. Anyone, including those who are not logged in, can use the mobile editor. You can also check your watchlist on mobile, add/remove articles from it, and more. If you don't want to use the mobile version, you can find options at the bottom of every page to switch to the desktop version.

Legacy mobile browsers that were fairly advanced during their time, such as NetFront (2.3), should be able to browse the Wikipedia Mobile version without too much effort. Depending on a phone's capabilities, it may be advisable to turn images and JavaScript off.

Older featurephones' native browsers commonly have limited functionality and are outdated. If your phone is Java ME-capable, you might consider installing Opera Mini, a Java ME-based Internet browser for mobile phones. Some phones have Opera Mini built-in, and may only require setting the browser up for use. Opera Mini works by sending a request to Opera's servers, which return a compressed and stripped-down page to the phone. Depending on version, Opera Mini is often more functional and up-to-date than the native browser supplied with the phone. Opera Mini has a built-in Wikipedia search facility.

The Android app allows editing articles directly from the app. It has limited capability to show categories and talk pages. It is also available on F-Droid. An Android app for Wikimedia Commons is also community maintained. There is an Android app for Wiktionary, although it is no longer supported and has not been updated since August 2013.

The iOS app also provides a read and write version of Wikipedia, similar to the mobile web version. It allows users to share an article via Facebook and other social websites. It also allows users to find geotagged articles near their current location. It does not allow users to see categories or talk pages, nor to see the normal desktop version.

Many iOS apps exist for browsing Wikipedia. Besides the mobile version of the site, the only app capable of editing Wikipedia is the official one.

The desktop version of English Wikipedia is located at https://en.wikipedia.org

If a browser is installed for general use, it can be used to access the general Wikipedia site, also for editing, depending on limitations of the browser. A toggle switch between mobile and desktop view is available at the bottom of every page. One may want to adapt the user style and preferences to optimize them for the mobile device. For example, navigation popups may or may not be convenient on the mobile device.

Metro-style apps provides a read-only version of Wikipedia, similar to the mobile web version. The app when used in Windows RT is incapable of showing moving pictures.

The following mobile browsers can play video and audio files on Wikipedia:[1][2][3][4] Browsers not listed here are not supported at all.

A computer-generated audio (speech synthesis) version of all Wikipedia articles is provided by the Pediaphon service. It is usable on- and off-line with common MP3 players, PDAs, cell phones (WAP) and with every phone via voice call. Pediaphon can be used as a location-based service.

Amazon Kindles have access to Wikipedia content via the Kindle software's built-in web browser. All content is shown in black-and-white (all colored images and graphs are converted); this is a limitation of the Kindle's display hardware. Animation support is also poor, and some rendering bugs exist, such as a tendency for random portions of reference lists to become invisible.

The Wiki-as-Ebook project provides massive encyclopaedias for E-Book-readers created from a large set of Wikipedia articles (commercial; 2013). Colored images are converted to grayscale. 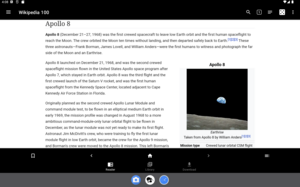 Kiwix on an Android-powered tablet

Offline access to English Wikipedia can be done in many ways.

The OpenZIM format uses the free Kiwix software available in the Microsoft Store, on Google Play and Apple's iOS App Store to view Wikipedia offline. A series of "customized apps" have also been released, of which Medical Wikipedia and PhET simulations are the two largest.

The Version 1.0 Editorial Team works on publishing sets of Wikipedia articles in print, CD, DVD, or some combination thereof. In 2008, SOS Children published a Wikipedia CD Selection for schools, which may be viewed at schools-wikipedia.org, and is available for free download via the charity's website.

Try one of the other external applications listed below which allow you to download a copy of Wikipedia's database and then view, search, and browse it offline.

English Wikipedia dumps in SQL and XML: dumps.wikimedia.org/enwiki/ and the Internet Archive. The database can be downloaded here, but you will need to set up a web server, PHP, MySQL and our wiki software, MediaWiki, to make use of it.

The mobile version is based on the MobileFrontend extension of the MediaWiki software, and maintained by the Wikimedia Foundation's Reading Web team.

Wikimedia Commons has media related to Wikipedia on PDAs and mobile phones.

MediaWiki has documentation related to: Extension:MobileApp
Retrieved from "https://safernicotine.wiki/mediawiki/index.php?title=Help:Mobile_access&oldid=22587"
Categories:
Cookies help us deliver our services. By using our services, you agree to our use of cookies.